It was the only time of the year when exams were not important to my parents. As soon as the answer paper was submitted, I’d run to the ‘Main Gate’ of my school, and wait to be picked up by my parents and be taken to Congress Bhavan. After the customary respects were paid to Ma, I would be left free to wander around the ‘Pujo Pandal’ and look for my friends. Some days there were drawing or essay contests.  Atleast one morning was spent sitting on the edge of the stage and distributing ‘Proshad’ to people, or if your luck ran dry, you could be roped in for behind the scenes work like helping to assemble the 3 or so fruits and a Padha for the Proshad.

Lunchtime was heralded by the youngsters (I was still in the kids category) pushing aside the scattered chairs to make way for the long rows of tables and chairs, on which batches and batches of Bangalis would be fed. This was the cue to run to the kitchen area to volunteer for the days Poribeshon. The pecking order for Poribeshon was quite clear, little kids would be handed Shaalpata, bowls of lemon and salt and other such inconsequential things to lay out on the tables. The bigger and thus cooler youngsters were handed big steaming buckets of kichudi, labda or chatni. If you were one who didn’t like to walk too much, you could opt to sit at the dabba service counter – run for those unfortunate family members who could not make it, but mostly for those who did not want to go home and cook dinner. 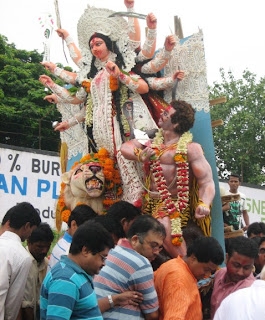 After a nice long siesta back home, it was time to get really dressed up to hit the Pujo again. The evening session was always more glamorous, involving artist performances enjoyed while munching oily Cheeken Rolls from the numerous food stalls. Usually we kids would perform a choreographed group dance every year, but that’s a memory I would like to repress, since I have 2 miserably left feet. Some kids would sing, but my acute tone deafness and lack of knowledge in Robindro Songith left no such avenue open.

Those were the days when the Pujo meant nothing more than 5 days of fun, food and new clothes.

In 2010 I was employed in Delhi during Pujo, and so busy that I had barely any time to even breathe. Yet every day I thought about getting out to go have a look at the gorgeous Protima  at CR Park or some really big Pujo Pandal. I missed the mesmerizing beats of the dhaki who were fascinating but poor peasants imported from West Bengal. I wanted to see the Dhunuchi Naach. I finally managed to get out on the last day, and called my mom to ask for directions. It’s only then I was told that the Bishorjon was over, and I realized how disconnected I had become.

Since then I have made it a point to take a day off and spend time doing the little things that make a Pujo what it is. As a Probashi Bangali it is not about visiting various Pandals across the city and admiring their decorations. Think of it as the difference between the roadside Ganpati Mandals, where you are a spectator, and your Society’s Ganpati, where you are a participant, but it’s not your private affair. 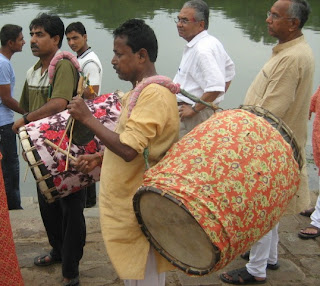 When Congress Bhavan became so popular that it lost its charm of personal touch, my parents along with many others started our very own little Pujo in Baner. They go house to house inviting the Bengalis of the area to attend and to collect Chada. The Protima is small, made up beautifully but unostentatiously. While dad is supervisor of the little kids handing out plates and collecting coupons, and the ‘Senior Citizens’ Food Court’, mom is the prompter for the play that is produced and performed by the kakus and kakimas or others in the category of ‘family friends’. There are definitely perks to being the daughter of such well placed parents. Last year I made my on stage debut as the (English)narrator for the play, and I was also given the highly sensitive task of serving desert during Bhog. Since only a single helping is allowed, it takes quite a strong man (or woman) to stand between a Bangali and his (rightful second helping of)mishti. And though the dhaki is not as old and legendary as the one from Congress Bhavan, when I hear those familiar beats, it feels like home.

Popular posts from this blog

August 20, 2019
Several months after turning 30, after over a decade of being able to vote, drive and consume alcohol (except in Maharashtra, where I’ve been legally drinking only since the past 5 years!), I can say I feel like an adult. However, before you jump to conclusions - this post isn’t going to be a rant about the dark side of adulting – the endless chores, bills and to-do lists.
(I’ll save that for a post about the privileges of moving to a “developed” country, i.e. where one is confronted daily with classic cases of choice overload. Choices are abundant e.g. disposing of garbage into the appropriate bin, which of the myriad of highly specific Sunday-quiet day laws to break, what obscure cycling-traffic rules to ignore, and the like.)
Adulting came to me in a big bundle, which is why I am so aware of it having arrived. The same time that I turned 30, I started to work at the organisation I had set my sights on years ago. I also moved to my very own little apartment, in a small (by my standa…
Post a Comment
Read more

August 24, 2018
Wenn man sich schön macht, auch wenn’s hässlich ist – Berlin, Berlin, Berlin Und wenn Stefan plötzlich Steffi ist – Berlin, Berlin, Berlin Wenn das alles geht und du dich fragst, wie das zusammenpasst. Das ist Berlin, Berlin, Berlin – Berlin, Berlin, Berlin
I’ve returned from a journey. A long, exhausting, exciting, amazing 6-month long trip.
I started at Tegel airport. It’s where I landed to try and conquer the interview and the big, not so bad city of Berlin. In the beginning, the plan was to put one foot in front of the other, slowly, surely.
U-Bhf Seestr. From the airport to Seestrasse, which would eventually become my house for a few months. Not a home, but a good-sized house, shared with people who made me dread climbing those 4 flights of stairs. Its fair to say that I got off to a lukewarm start on my journey through Berlin.
U-Bhf Oranienburger Tor. Auguststrasse. As I walked around this neighbourhood, I could feel the creativity brimming through the dilapidated walls. August…
Post a Comment
Read more